Hamilton Howard "Albert" Fish (May 19, 1870 – January 16, 1936) was an American serial killer. He was also known as the Gray Man, the Werewolf of Wysteria, the Brooklyn Vampire, the Moon Maniac, and The Boogey Man. A child rapist and cannibal, he boasted that he "had children in every state", and at one time stated the number was about 100. However, it is not known whether he was referring to rapes or cannibalization, nor is it known if the statement was truthful. He was a suspect in at least five murders during his lifetime. Fish confessed to three murders that police were able to trace to a known homicide, and he confessed to stabbing at least two other people. He was put on trial for the kidnapping and murder of Grace Budd, and was convicted and executed by electric chair. His crimes were dramatised in The Gray Man, starring Patrick Bauchau as Fish 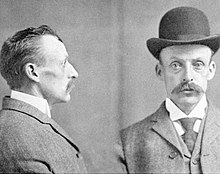 What a thrill that will be if I have to die in the electric chair. It will be the supreme thrill. The only one I haven't tried.

Misery leads to crime. I saw so many boys whipped it ruined my mind.

None of us are saints.

Going to the electric chair will be the supreme thrill of my life.