Albert Kesselring (30 November 1885 – 16 July 1960) was a German Luftwaffe Generalfeldmarschall during World War II. In a military career that spanned both World Wars, Kesselring became one of Nazi Germany's most skilful commanders, and one of the most highly decorated, being one of 27 soldiers awarded the Knight's Cross of the Iron Cross with Oak Leaves, Swords and Diamonds. Nicknamed "Smiling Albert" by the Allies and "Uncle Albert" by his troops, he was one of the most popular generals of World War II with the rank and file 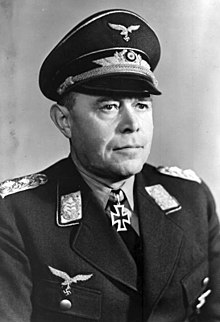 Allied air power was the greatest single reason for the German defeat.

A military leader often faces a situation he has to deal with, but because it is his duty, no court can try him.

War is possible only if you have a lot of enemies. If all the enemies get together and form one front - if you cut down the number of enemies - there would be no war.

It would have been easier to fight alone with inadequate forces than to have to accept...responsibility for our ally's lack of fighting qualities and dubious loyalty.

A soldier's first duty is to obey, otherwise you might as well do away with soldiering.

I have always had plenty of friends, and now at age sixty, I face four walls as a common prisoner.