Albert Gallatin Mackey (March 12, 1807 – June 20, 1881) was an American medical doctor and author. He is best known for his writing many books and articles about freemasonry, particularly the Masonic Landmarks 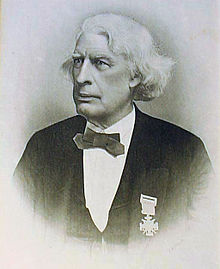 The religion of Freemasonry is not Christian

The ultimate success of Masonry depends on the intelligence of her disciples.

Freemasonry is a science of symbols, in which, by their proper study, a search is instituted after truth, that truth consisting in the knowledge of the divine and human nature of God and the human Soul.

The Cabala may be defined to be a system of philosophy which embraces certain mystical interpretations of Scripture, and metaphysical and spiritual beings... Much use is made of it in the advanced degrees, and entire Rites have been constructed on its principles.

So important , indeed, is it (Light), and so much does it pervade with its influence the whole Masonic system, that Freemasonry itself anciently received, among other appellations, that of Lux, or Light, to signify that it is to be regarded as that sublime doctrine of Divine Truth by which the path of him who has attained it is to be illuminated in his pilgrimage of life.

The triangle pointing downward is a female symbol corresponding to the yoni and the upward pointing triangle is the male, the lingam ... When the two triangles are interlaced, it represents the union of the active and passive forces in nature; it represents the male and female elements.

The Kassideans or Assideans...arose either during the Captivity or soon after the restoration...The Essenians were, however, undoubtedly connected with the Temple (of Solomon), as their origin is derived by the learned Scalier, with every appearance of truth, from the Kassideans, a fraternity of Jewish devotees, who, in the language of Laurie, had associated together as 'Knights of the Temple of Jerusalem.'...From the Essenians Pythagoras derived much, if not all, of the knowledge and the ceremonies with which he clothed the esoteric school of his philosophy.