Albert Richard Parsons (1848–1887) was a pioneer American socialist and later anarchist newspaper editor, orator, and labor activist. As a teenager, he served in the military force of the Confederate States of America in Texas, during the American Civil War. After the war, he settled in Texas, and became an activist for the rights of former slaves, and later a Republican official during reconstruction. With his wife Lucy Parsons, he then moved to Chicago in 1873 and worked in newspapers. There he became interested in the rights of workers. In 1884, he began editing The Alarm newspaper. Parsons was one of four Chicago radical leaders controversially convicted of conspiracy and hanged following a bomb attack on police remembered as the Haymarket affair 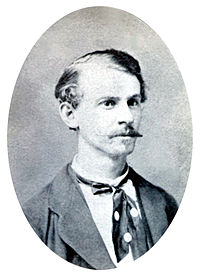 Let the voice of the people be heard!

Formerly the master selected the slave; today the slave selects his master.

Every great robbery that was ever perpetrated upon a people has been by virtue of an in-the-name-of law.