Albert Aaron Rosenfeld (28 July 1885 – 7 September 1970) was a pioneer Australian rugby league footballer, a national representative whose club career was played in Sydney and in England. He played for New South Wales in the very first rugby league match run by the newly created 'New South Wales Rugby Football League' which had just split away from the established New South Wales Rugby Football Union. During his 16-year English career he set a number of try-scoring records including the standing world first-grade record of 80 tries in a season in 1913–14 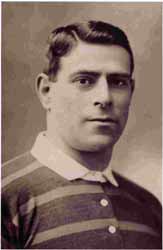 I've got a lot of cutting and pasting to do, gentlemen, so why don't you please return to your porch rockers and resume whittling.

My intellect as well as my instincts lead me to the conclusion that men have a positive yearning to be good.