Albert Szent-Györgyi von Nagyrápolt (/s?nt?d???rd?i/; Hungarian: nagyrápolti Szent-Györgyi Albert, pronounced [?n??ra?polti ?s?n?ør?i ??lb?rt]; September 16, 1893 – October 22, 1986) was a Hungarian biochemist who won the Nobel Prize in Physiology or Medicine in 1937. He is credited with discovering vitamin C and the components and reactions of the citric acid cycle. He was also active in the Hungarian Resistance during World War II and entered Hungarian politics after the war 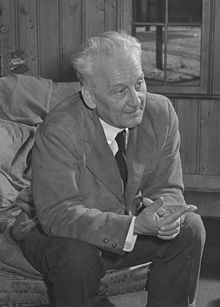 Investigations during the last few decades have brought hydrogen instead of carbon, and instead of CO2 water, the mother of all life, into the foreground."

The foodstuff, carbohydrate, is essentially a packet of hydrogen, a hydrogen supplier, a hydrogen donor, and the main event during its combustion is the splitting off of hydrogen.