Alberto Tomba (born 19 December 1966 in San Lazzaro di Savena) is a former World Cup alpine ski racer from Italy. He was the dominant technical skier (slalom and giant slalom) in the late 1980s and 1990s. At 6 ft tall and 90 kg, his powerful build was a contrast to the lighter, more traditional technical skiers who prioritised agility over muscle, however Tomba was able to take advantage of the introduction of spring-loaded ski gates which replaced the older, solid gates in the early 1980s by using his power to maintain a faster, more direct line through courses. Tomba won three Olympic gold medals, two World Championships, and nine World Cup season titles: four in slalom, four in giant slalom, and one overall title. He was popularly called Tomba la Bomba ("Tomba the Bomb") 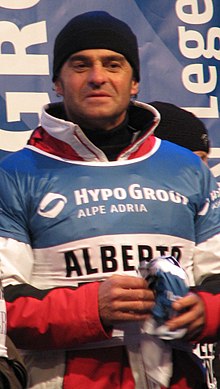 I used to have a wild night with three women until 5am., but I am getting older. In the Olympic village here, I will live it up with five women, but only until 3am.

Enter with the torch in the stadium. 80,000 people screaming. I was waiting downstairs for the start for 10 hours; I was so tired with the torch. I give the torch to the combined ski cross country that they win gold in Lillehammer in 1994.

I was introverted, shy. But if you win a lot you need to be extroverted, or they'll think you're arrogant.

#Arrogant #I Need You

I never took banned substances, but I have been courted by doctors who wanted to improve my blood in the laboratory. My mother always put them on a flight.

“It's typical of Italian culture that we only start to feel emotional about something when we have the possibility to see it in front of us. By February, Italy will have Olympic fever.”

“Giorgio tried to push away from the gates during the race as I suggested to him. But unfortunately he was wrong. He made a mistake. It shouldn't have happened.”

“I really lack the words to compliment myself today.”

#Be Myself #Compliment #Today #Words

All the people know Tomba, but not the real Alberto,