Alcibiades, son of Cleinias, from the deme of Scambonidae (/?æls??ba?.?di?z/; Greek: ?????????? ???????? ???????????, transliterated Alkibiád?s Kleiníou Skamb?níd?s; c. 450 – 404 BC), was a prominent Athenian statesman, orator, and general. He was the last famous member of his mother's aristocratic family, the Alcmaeonidae, which fell from prominence after the Peloponnesian War. He played a major role in the second half of that conflict as a strategic advisor, military commander, and politician 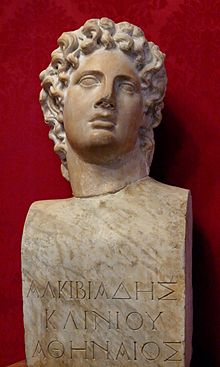 As contraries are known by contraries, so is the delight of presence best known by the torments of absence.

As contraries are known by contraries, so is the delights of presence best known by the torments of absence.

Men do not rest content with parrying the attacks of a superior, but often strike the first blow to prevent the attack being made. And we cannot fix the exact point at which our empire shall stop; we have reached a position in which we must not be content with retaining but must scheme to extend it, for, if we cease to rule others, we are in danger of being ruled ourselves. Nor can you look at inaction from the same point of view as others, unless you are prepared to change your habits and make them like theirs.