Aldus Pius Manutius (Italian: Aldo Manuzio; 1449 – February 6, 1515) was an Italian humanist who became a printer and publisher when he founded the Aldine Press at Venice. He is sometimes called "the Elder" to distinguish him from his grandson Aldus Manutius the Younger 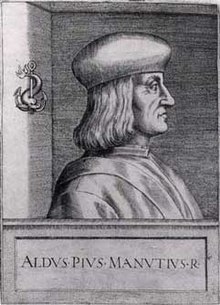 It is disgraceful to live as a stranger in one's country, and be an alien in any matter that affects our welfare.

It is not work that kills; but no work and overwork.

Those who cultivate letters must be supplied with the books necessary for their purpose; and until this supply is secured I shall not rest.