Alejo Carpentier y Valmont (December 26, 1904 – April 24, 1980) was a Cuban novelist, essayist, and musicologist who greatly influenced Latin American literature during its famous "boom" period. Born in Lausanne, Switzerland, Carpentier grew up in Havana, Cuba, and despite his European birthplace, he strongly self-identified as Cuban throughout his life. He traveled extensively, particularly in France, and to South America and Mexico, where he met prominent members of the Latin American cultural and artistic community. Carpentier took a keen interest in Latin American politics and often aligned himself with revolutionary movements, such as Fidel Castro's Communist Revolution in Cuba in the mid-20th century. Carpentier was jailed and exiled for his leftist political philosophies 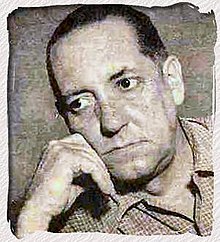 I gladly accepted the commission but was uncertain about what the end result would be. On the one hand, Cuban music was conquering the world; being heard everywhere, and our small island was already producing one of the popular musical genres of the 20th century.

Those who have always had faith in its final success can do no less than rejoice as if it was our own triumph after five years of daily struggle to impose Cuban music on the European continent.

The anxious wait lasted four years, and the alert ears never despaired of hearing, at any moment, the voice of the great conch shell which would bellow through the hills to announce to all that Macandal had completed the cycle of his metamorphoses, and stood poised once more, sinewy and hard, with testicles like rocks, on his own human legs (36-37).

In America everything is fantastical.

I studied harmony and composition in a very spontaneous manner.

In the Kingdom of Heaven, there is no grandeur to be won, inasmuch as there all is an established hierarchy, the unknown is revealed, existence is infinite, there is no possibility of sacrifice, all is rest and joy. For this reason, bowed down by suffering and duties, beautiful in the midst of his misery, capable of loving in the face of afflictions and trials, man finds his greatness, his fullest measure, only in The Kingdom of This World.

A day will come when man will discover an alphabet in the eyes of the chalcedonies, in the marking of the moth, and will learn in astonishment that every spotted snail has always been a poem.

The truth was much more beautiful.