Aleksandar Tijani? (Serbian Cyrillic: ?????????? ???????; 13 December 1949 – 28 October 2013) was a Serbian journalist and director of the country's public broadcaster Radio Television of Serbia from 2004 to 2013. During his career he was a star columnist for leading newspapers and magazines published in SFR Yugoslavia and Serbia, editor in chief of several prominent television stations, political advisor to prominent Serbian politicians, and Information Minister for four months in 1996 in the government headed by Mirko Marjanovi? during the rule of Slobodan Miloševi? 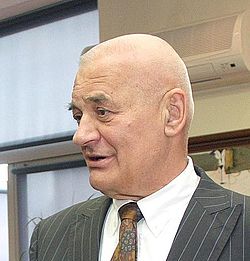 “If we can't sing in harmony it's better we don't appear in Europe.”