Aleksandr Mikhaylovich Vasilevsky (Russian: ?????????? ??????????? ????????????, September 30 [O.S. September 18] 1895, Vichuga – December 5, 1977) was a Russian career officer in the Red Army who was promoted to the rank of Marshal of the Soviet Union in 1943. He was the Chief of the General Staff of the Soviet Armed Forces and Deputy Minister of Defense during World War II, as well as Minister of Defense from 1949 to 1953. As the Chief of the General Staff, Vasilevsky was responsible for planning and coordinating almost all decisive Soviet offensives in World War II, from the Stalingrad counteroffensive to the assault on East Prussia and Königsberg 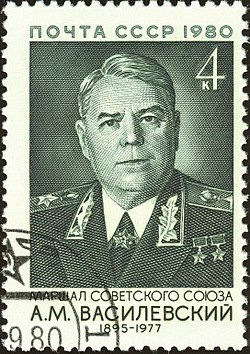 By seizing the formerly little-known Height 102.0 - the Mamayev Hill - the Red Army fought its way to the fascists' den - Berlin. We are proud to say that our victory in Stalingrad radically changed the whole situation in the Second World War. And this victory meant that our Motherland had withstood one of the most difficult tests in its history.

A man who knew his job as he spent a long time commanding a regiment and who earned great respect from everybody.

It was my view that the catastrophe. . . . could have been avoided if Vasilevsky had taken the position he should have. He could have taken a different position. . . . but he didn't do that, and as a result, in my view, he had a hand in the destruction of thousands of Red Army fighters in the Kharkov campaign.

Conditions to the north of us, in the Voronezh and Steppe Fronts zone of action, and our offensive on Kharkov demands that we not lose time and we commit all forces so that we can draw off as many divisions as possible from Kharkov. And even if we do not draw them off, at least we will not give Manstein the ability to take any of his units from our part of the front. If we attract one or two German tank divisions - it will be the best contribution to the defeat of the enemy in the south.

I did not decide to become an officer to start a military career. I still wanted to be an agronomist and work in some remote corner of Russia after the war. I could not suppose that my country would change, and I would.