Alesha Dixon (born 7 October 1978) is a British singer, dancer, rapper, model and television presenter from Welwyn Garden City, England. She found fame in the all-female R&B/garage trio Mis-Teeq. The trio disbanded in 2005 and Dixon pursued a music career as a solo artist, signing to Polydor Records. She began recording her debut solo album, Fired Up, in 2006, but due to poor record sales of her first two singles, "Lipstick" and "Knockdown", she was dropped from Polydor 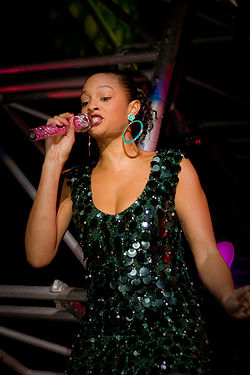 I think people in England take things for granted, we complain about our NHS system and yes it's not perfect but believe me it's far better than what they've got here.

Obviously music is my first job.

Strictly has just given me a real zest for life. Life is so short. We should all grasp it.

When you are knocked down you have two choices - stay down or get back up, stronger.

It was the lowest point of my life. I just kept thinking, 'What have I done to deserve this?' I didn't see the point in living.

By the way, dancers are not human beings. How can you be human and do what they do?