Alexander Peter "Fats" Delvecchio (born December 4, 1931) is a former ice hockey player, coach, and general manager who spent his entire National Hockey League (NHL) playing, coaching, and managerial careers with the Detroit Red Wings. He played in 1549 games across 24 seasons where he amassed 456 goals, 825 assists, and 1281 points. At the time of his retirement he was second in league history in games played, assists, and points. He won the Lady Byng Trophy for sportsmanship and gentlemanly conduct three times, was a member of three Stanley Cup winning teams, and was inducted into the Hockey Hall of Fame in 1977. Delvecchio, Steve Yzerman, and Nicklas Lidstrom are the only players to have played in over 1500 games while also spending their entire career with one club, all three having played in Detroit. On January 1, 2017, in a ceremony prior to the Centennial Classic, Delvecchio was part of the first group of players to be named one of the '100 Greatest NHL Players' in history 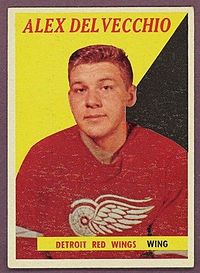 It would have been worse if we hadn't blocked the kick after Toronto's second touchdown.