Adelaide Alexander "Alex" Sink (born June 5, 1948) is an American politician and financier. A member of the Democratic Party, Sink was the Chief Financial Officer for the state of Florida and treasurer on the board of trustees of the Florida State Board of Administration. She was the Democratic nominee for Governor of Florida and faced Republican nominee Rick Scott in the 2010 Florida gubernatorial election, losing to Scott by a 1% margin. Sink was the unsuccessful Democratic candidate in the special election, losing to Republican David Jolly on March 11, 2014, in a race to fill the vacancy created by the death in 2013 of U.S. Representative Bill Young 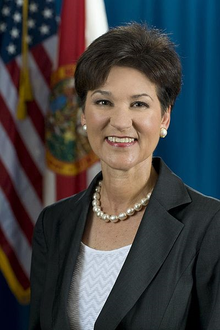 Immigration reform is important in our country. We have a lot of employers over on the beaches that rely upon workers and especially in this high-growth environment, where are you going to get people to work to clean our hotel rooms or do our landscaping? We don't need to put those employers in a position of hiring undocumented and illegal workers.

“I honestly can't remember, because I debated with myself.”

“With the state divided 40 percent Democrat, 40 percent Republican and 20 percent in the middle, yes, we do have to get our base out. We can do that but each and every one of us has to reach out to our neighbors and friends.”

I want the cabinet to stand up and have a spine and a backbone and take responsibility.

“That's an elected position? I've never heard of it. Even the most intelligent people and the most well-informed people are not aware that the state has a chief financial officer.”