Alexander H. Stephens (born Alexander Hamilton Stephens; February 11, 1812 – March 4, 1883) was an American politician from the state of Georgia, and the Confederate vice president throughout the American Civil War. His Cornerstone Speech of March 1861 defended slavery in the most uncompromising terms, though after the war he tried to distance himself from his earlier sentiments. In the course of the war, he became increasingly critical of Confederate President Jefferson Davis's policies, especially conscription and the suspension of habeas corpus. In February 1865, he was one of the commissioners who met with Lincoln at the abortive Hampton Roads Conference to discuss peace terms. After his arrest, and subsequent pardon, (for his part in the rebellion), Stephens went on to again serve in Congress, and later as the 50th Governor of Georgia; shortly before his death 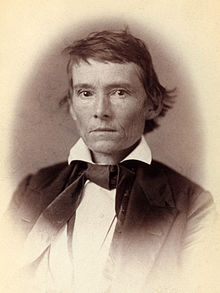 Away with the idea of getting independence first, and looking for liberty afterwards... Our liberties, once lost, may be lost forever.

Its foundations are laid, its cornerstone rests, upon the great truth that the negro is not equal to the white man; that slavery . . . is his natural and normal condition.

Davis was weak and vascillating, timid, petulant, peevish, obstinate, but not firm.

Our new government is founded upon exactly the opposite idea; its foundations are laid, its corner- stone rests, upon the great truth that the negro is not equal to the white man; that slavery subordination to the superior race is his natural and normal condition. This, our new government, is the first, in the history of the world, based upon this great physical, philosophical, and moral truth.

As a race, the African is inferior to the white man. Subordination to the white man is his normal condition. He is not his equal by nature and cannot be made so by human laws or human institutions. Our system, therefore, so far as regards this inferior race, rests upon this great immutable law of nature.

All the genius I have lies in this; when I have a subject in hand, I study it profoundly.

If centralism is ultimately to prevail; if our entire system of free Institutions as established by our common ancestors is to be subverted, and an Empire is to be established in their stead; if that is to be the last scene of the great tragic drama now being enacted: then, be assured, that we of the South will be acquitted, not only in our own consciences, but in the judgment of mankind, of all responsibility for so terrible a catastrophe, and from all guilt of so great a crime against humanity.

The greatest curse that can befall a free people, is civil war.

These ceremonies and the National Statuary Hall will teach the youth of the land in succeeding generations as they come and go that the chief end of human effort in a sublunary view should be usefulness to mankind, and that all true fame which should be perpetuated by public pictures, statues, and monuments, is to be acquired only by noble deeds and high achievements and the establishment of a character founded upon the principles of truth, uprightness, and inflexible integrity.