Alexander Selkirk (1676 – 13 December 1721) was a Scottish privateer and Royal Navy officer who spent more than four years as a castaway (1704–1709) after being marooned by his captain on an uninhabited island in the South Pacific Ocean. He survived that ordeal, but succumbed to tropical illness a dozen years later while serving aboard HMS Weymouth off West Africa 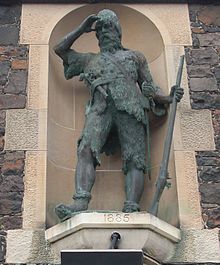 “Whenever a snowflake leaves the sky, it turns and turns to say Good-by!”