Alexander Spotswood (c. 1676 – 6 June 1740) was a Lieutenant-Colonel in the British Army and a noted Lieutenant Governor of Virginia. He is noted in Virginia and American history for a number of his projects as governor, including his exploring beyond the Blue Ridge Mountains, his establishing what was perhaps the first colonial iron works, and his negotiating the Treaty of Albany with the Iroquois Nations of New York 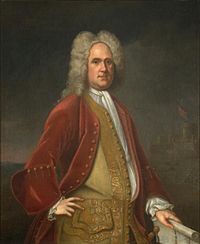 I look upon Virginia as a rib taken from Britain's side... While they both proceed as living under the marriage-compact, this Eve might thrive so long as her Adam flourishes. Whatever serpent shall tempt her to go astray etc [will only cause] her husband to rule more strictly over her.