Alexandra Ioana Stan (born 10 June 1989) is a Romanian singer-songwriter. Born in the city of Constan?a, she made her worldwide breakthrough with the 2011 single "Mr. Saxobeat", which was written and produced by Marcel Prodan and Andrei Nemirschi. Prodan and Nemirschi discovered Stan at a karaoke bar in 2009 and offered her a contract with their label, Maan Records. "Mr. Saxobeat" was preceded by the singer's debut recording, "Lollipop (Param Pam Pam)" (2009), which rose Stan to fame in her native country. "Mr. Saxobeat" quickly achieved commercial success in Romania and then abroad, reaching the number one spot in a total of ten countries. Saxobeats, her debut studio album, was made available for purchase in August 2011 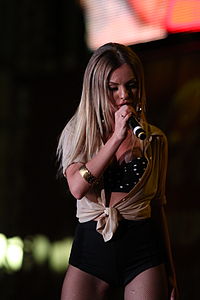 Wa-wa-wa watch bikinis no top. See my sex sex sex sexy bikinis would drop. Tic-tac-toe don't play me I'll stop. Tonight I will make you mine.

Sunny, happy with the music, no money. I'm thinking you're on holiday. Sipping yellow lemonade.

Hey sexy boy, set me free, don't be so shy, play with me My dirty boy, can't you see, you are the one for meeeee.