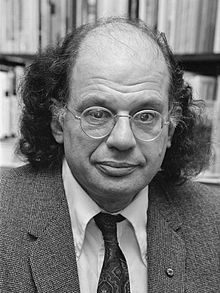 Irwin Allen Ginsberg (/???nzb?r?/; June 3, 1926 – April 5, 1997) was an American poet and one of the leading figures of both the Beat Generation of the 1950s and the counterculture that soon would follow. He vigorously opposed militarism, economic materialism and sexual repression and was known as embodying various aspects of this counterculture, such as his views on drugs, hostility to bureaucracy and openness to Eastern religions. He was one of many influential American writers of his time known as the Beat Generation, which included famous writers such as Jack Kerouac and William S. Burroughs

Poetry is the one place where people can speak their original human mind. It is the outlet for peopl ...

I think it was when I ran into Kerouac and Burroughs - when I was 17 - that I realized I was talking ...

I want people to bow as they see me and say he is gifted with poetry, he has seen the presence of th ...

What peaches and what penumbras! Whole families shopping at night! Aisles full of husbands! Wives in ...

No monster vibration, no snake universe hallucinations. Many tiny jeweled violet flowers along the p ...

in my dreams you walk dripping from a sea journey on the highway across America in tears to the door ...

Last Exit to Brooklyn should explode like a rusty hellish bombshell over America and still be eagerl ...

Democracy! Bah! When I hear that I reach for my feather boa!

If I had a soul I sold it for pretty words If I had a body I used it up spurting my essence Allen Gi ...

Holy the supernatural extra brilliant intelligent kindness of the soul!

The apparition of an evil, sick unconscious wild city rose before me in visible semblance, and about ...

Poetry's role is to provide spontaneous individual candor as distinct from manipulation and brainwas ...