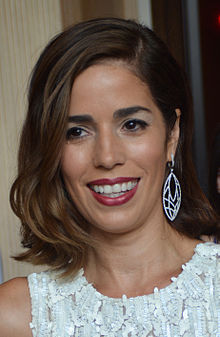 Ana Ortiz (born January 25, 1971) is an American actress and singer. Having pursued a career in performing arts–ballet and singing– from a young age, she eventually attended University of the Arts. Ortiz. began her acting career in theatre, in early 2000s starred in the short-lived NBC sitcoms Kristin (2001) and A.U.S.A. (2003), and had recurring roles on Over There and Boston Legal

I was born and raised in New York City, Manhattan, uptown.

I need to eat before a workout. If I exercise in the morning, I'll have a little oatmeal, cereal, or ...

The most important thing is to find the balance between city and nature. I have that 'hippie quality ...

I'm not so much surprised by the success of 'Ugly Betty' as I am feeling so blessed by it.

I have a rescue dog named Fideo, which means 'noodle' in Spanish, and a cat named Hutch.

Ugly Betty' has been the most important thing I've ever done, easily. I was able to do more with one ...

I take my dog, Fideo, out for a hike in Runyon Canyon three times a week. It's about 45 minutes roun ...

Latinos are a vital but underrepresented force in this country.

I think it's really important for my daughter to see her parents being physically fit and for that t ...

I couldn't have asked for a better kid. She's our own little Buddha baby so far. I'm waiting for the ...

My family couldn't be more supportive. They're worried and they're always in my business, and my mot ...

I'm passionate about mobilizing young Latinos to get to the polls, so I'm involved with Voto Latino. ...

Being in New York City is the best because I'm always walking, taking the subway and walking up and ...

I was really lucky. My gal pal was my mom.

I will probably only give birth to two and then the rest will come to our family however it happens. ...