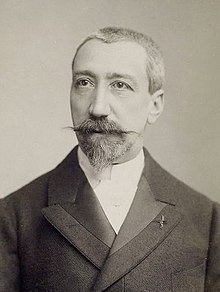 Anatole France (French: [anat?l f???s]; born François-Anatole Thibault, [fr??swa anat?l tibo]; 16 April 1844 – 12 October 1924) was a French poet, journalist, and novelist. He was born in Paris, and died in Saint-Cyr-sur-Loire. He was a successful novelist, with several best-sellers. Ironic and skeptical, he was considered in his day the ideal French man of letters. He was a member of the Académie française, and won the 1921 Nobel Prize in Literature "in recognition of his brilliant literary achievements, characterized as they are by a nobility of style, a profound human sympathy, grace, and a true Gallic temperament"

To accomplish great things, we must not only act, but also dream; not only plan, but also believe.

All changes, even the most longed for, have their melancholy; for what we leave behind us is a part ...

Until one has loved an animal a part of one's soul remains unawakened.

“To accomplish great things, we must not only act, but also dream; not only plan, but also believe ...

It is by acts and not by ideas that people live.

You learn to speak by speaking, to study by studying, to run by running, to work by working; in just ...

Nine tenths of education is encouragement.

To imagine is everything, to know is nothing at all.

That man is prudent who neither hopes nor fears anything from the uncertain events of the future.

Of all the sexual aberrations, chastity is the strangest.

It is well for the heart to be naive and the mind not to be.

A people living under the perpetual menace of war and invasion is very easy to govern. It demands no ...