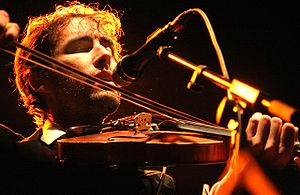 Andrew Wegman Bird (born July 11, 1973) is an American musician, songwriter, and multi-instrumentalist. He was initially known through his work with the band Squirrel Nut Zippers before forming Bowl of Fire, and is now best known as a solo musician. Bird's primary instrument is the violin, but he is also proficient at other instruments including whistling, guitar, and the glockenspiel. He wrote "The Whistling Caruso" for The Muppets and performed the whistling heard in both the film and the soundtrack. Bird composed the score for the FX series Baskets

I've always been fascinated and stared at maps for hours as a kid. I've especially been most intrigu ...

You travel with the hope that something unexpected will happen. It has to do with enjoying being los ...

A good espresso to me is a little bit salty; you just become used to a good taste. Anytime I go into ...

My mom had this romantic notion of her children playing classical music. The idea is you learn it wh ...

There is something comforting about going into a practice room, putting your sheet music on a stand ...

Since I first picked up the violin, I've been very interested in tone and texture: I would have very ...

I create little challenges for myself, like, 'Okay, whatever you do in this song, you've got to some ...

I've done my share of busking, and it's fun until it isn't. There are musicians in the subways that ...

Melodies are just honest. They can only be what they are. Words have the capacity for deception. The ...

Usually bands with violins - it's this little, poorly amplified looking kind of futile on stage, and ...

My favorite literature to read is fairly dry history. I like the framework, and my imagination can d ...

A day off after a show with no agenda in a foreign city is about the most fertile creative situation ...

With the words, a lot of things start with questions. Some word kind of piques my interest, and I lo ...

I don't want technology to take me so far that I don't have to use my brain anymore. It's like GPS t ...

Anyway, I'm digressing, but this is just kind of this 10-and-a-half-minute, ambient - you hear cicad ...