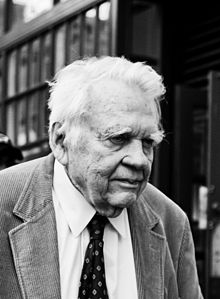 Most of us end up with no more than five or six people who remember us. Teachers have thousands of p ...

People will generally accept facts as truth only if the facts agree with what they already believe.

I don't like food that's too carefully arranged; it makes me think that the chef is spending too muc ...

One of the most glorious messes in the world is the mess created in the living room on Christmas day ...

Happiness depends more on how life strikes you than on what happens.

The average dog is a nicer person than the average person.

Figure skating is an unlikely Olympic event but its good television. It's sort of a combination of g ...

We're all torn between the desire for privacy and the fear of lonliness. We need each other and we n ...

I like ice hockey, but it's a frustrating game to watch. It's hard to keep your eyes on both the puc ...

We're all proud of making little mistakes. It gives us the feeling we don't make any big ones.

Those to whom his word was revealed were always alone in some remote place, like Moses. There wasn't ...

We all ought to understand we're on our own. Believing in Santa Claus doesn't do kids any harm for a ...

If you smile when no one else is around, you really mean it.

A woman over 30 will never wake you in the middle of the night to ask, "What are you thinking?". She ...