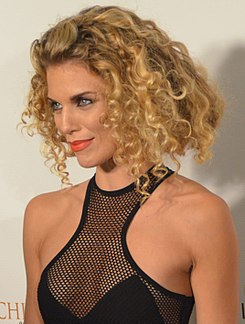 AnnaLynne McCord (born July 16, 1987) is an American actress and former model. Known for playing vixen-type roles, McCord first gained prominence in 2007 as the scheming Eden Lord on the FX television series Nip/Tuck, and as the pampered Loren Wakefield on the MyNetworkTV telenovela American Heiress

I love being outdoors, playing beach tennis, going for runs in the sand, or doing a three-hour hike ...

There are a lot of recent pics of me rocking silk strings of beads. They're made by survivors of the ...

I know imitation is the highest form of flattery, but stealing one's identity is totally different.

I loved killing zombies in 'Day of the Dead.' I basically welcome anything that involves being dirty ...

I loved math. I was such a nerd! I really enjoyed working through problems and finding the solution.

A good two years after Hurricane Katrina I remember feeling so devastated and so ignorant that there ...

You can make or break an outfit by not knowing your body type - certain things work on certain peopl ...

Dial Star' is about an aspiring actress who finds the cell phone of AnnaLynne McCord and impersonate ...

I was always the girl who wore the mismatching socks, frizzy hair, ponytail I wouldn't take out for ...

When I first moved to L.A., I didn't have a lot of money to join a gym or take classes, so I improvi ...

I grew up with not a lot of money and I definitely shopped at Goodwill. But even in my most unfortun ...

But if an actress asks me my opinion, I would tell her there are a million different designers who m ...