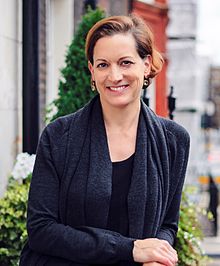 Anne Elizabeth Applebaum (born July 25, 1964) is an American journalist and Pulitzer Prize–winning author who has written extensively about communism and the development of civil society in Central and Eastern Europe. She is a visiting Professor of Practice at the London School of Economics, where she runs Arena, a project on propaganda and disinformation. She has also been an editor at The Economist and The Spectator, and a member of the editorial board of The Washington Post (2002–06)

High national emotions are permissible when a soccer team is playing precisely because they are impe ...

Most of the people buying the Soviet paraphernalia were Americans and West Europeans. All would be s ...

The evolution of a bourgeoisie is a healthy phenomenon when it grows and prospers thanks to bourgeoi ...