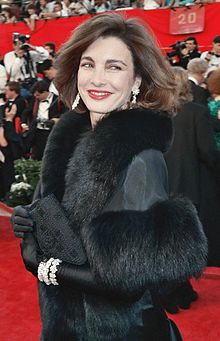 Anne Archer (born August 24, 1947) is an American actress. She was nominated for the Academy Award for Best Supporting Actress for the 1987 film Fatal Attraction. Her other film appearances include Paradise Alley (1978), Patriot Games (1992), Short Cuts (1993), Clear and Present Danger (1994) and Lullaby (2014). On stage, she starred as Mrs. Robinson in the West End production of The Graduate in 2001, and in the title role of The Trial of Jane Fonda at the 2014 Edinburgh Festival Fringe

You know, I love acting.

If I get a chance to act, I will act. And then I'm usually the happiest person around.

Communication is very important. And the arts do that, whether it's film or theater.

“Actors are trusting souls, and we must go by gut-level instinct, even after our agents and busine ...

If I feel the part is right, and I know that the producers and the director want me, I'd go for brok ...

You know, I always say musicians, they can do it on their own. They can practice their violin on the ...

“Night of the Wolf,”

“I love the theme. I definitely feel we are not just our bodies, that we are beings and that we go ...