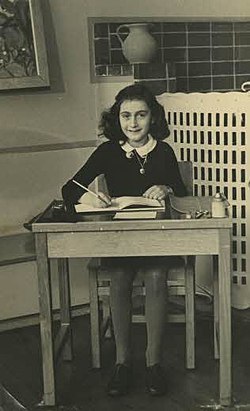 Annelies Marie Frank (German pronunciation: [?an?li?s ma??i? ??an? ?f?a?k]; Dutch pronunciation: [??n??lis ma??ri ???n? ?fr??k]; 12 June 1929 – February or March 1945) was a German-born diarist and writer. She is one of the most discussed Jewish victims of the Holocaust. Her diary, The Diary of a Young Girl, which documents her life in hiding during the German occupation of the Netherlands in World War II, is one of the world's most widely known books and has been the basis for several plays and films

Whoever is happy will make others happy too.

Despite everything, I believe that people are really good at heart.

How wonderful it is that nobody need wait a single moment before starting to improve the world.

Think of all the beauty still left around you and be happy.

Everyone has inside of him a piece of good news. The good news is that you don't know how great you ...

I don't think of all the misery but of the beauty that still remains.

No one has ever become poor by giving.

How noble and good everyone could be if, every evening before falling asleep, they were to recall to ...

Riches can all be lost, but that happiness in your own heart can only be veiled, and it will bring y ...

Despite everything, I believe people are really good at heart.

Then, without realizing it, you try to improve yourself at the start of each new day; of course, you ...

I think it's odd that grown-ups quarrel so easily and so often and about such petty matters. Up to n ...

I feel wicked sleeping in a warm bed, while my dearest friends have been knocked down or have fallen ...

Dead people receive more flowers than the living ones because the regret is stronger than gratitude.

Is discord going to show itself while we are still fighting, is the Jew once again worth less than a ...