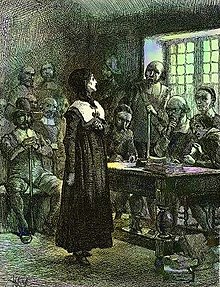 Anne Hutchinson (née Marbury; July 1591 – August 1643) was a Puritan spiritual adviser, mother of 15, and an important participant in the Antinomian Controversy which shook the infant Massachusetts Bay Colony from 1636 to 1638. Her strong religious convictions were at odds with the established Puritan clergy in the Boston area, and her popularity and charisma helped create a theological schism that threatened to destroy the Puritans' religious community in New England. She was eventually tried and convicted, then banished from the colony with many of her supporters

How did Abraham know that it was God that bid him offer his son, being a breach of the sixth command ...

But now having seen him which is invisible I fear not what man can do unto me.

If any come to my house to be instructed in the ways of God what rule have I to put them away? Do yo ...

I have been guilty of wrong thinking.

Better to be cast out of the Church than to deny Christ.

Neither do I think that I ever put any dishonour upon you.

As I understand it, laws, commands, rules and edicts are for those who have not the light which makr ...

Must not I then entertain the saints because I must keep my conscience.

I do here speak it before the court. I look that the Lord should deliver me by his providence.

“I desire to know wherefore I am banished?”

“For you see this scripture fulfilled this day and therefore I desire you as you tender the Lord a ...

“But after he was pleased to reveal himself to me I did presently, like Abraham, run to Hagar. And ...

“I confess I have been more choice and he hath left me to distinguish between the voice of my belo ...

“I am called here to answer before you, but I hear no things laid to my charge.”