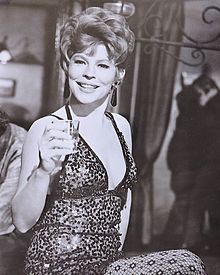 Anna Jane "Anne" Jackson (September 3, 1925 – April 12, 2016) was an American actress of stage, screen, and television. She was the wife of actor Eli Wallach, with whom she often co-starred. In 1956, she was nominated for the Tony Award for Best Featured Actress in a Play for her performance in Paddy Chayefsky's Middle of the Night

In times that are dark and God seems far [away], I look for him in small ways - the innocent laughte ...

Acting is making it seem like it's happening now.

I think subconsciously because of my upbringing, I was very aware of values and morals and that's wh ...

Each painting is fresh and new, a surprise even to myself.

My faith is certainly not as stable or constant as I'd like it to be. I'm a highly emotional person ...

It takes courage to say, "I need help" and to be vulnerable and accept advice from people who may be ...

After a few years of the addiction controlling my online life, and beginning to affect my life offli ...

The world needs your story in order to be complete.

God is not usually a burning bush in my life. He's usually a very quiet whisper. And he never shows ...

Sometimes when we are afraid to confess an area of brokenness or sin in our lives, we know the chang ...