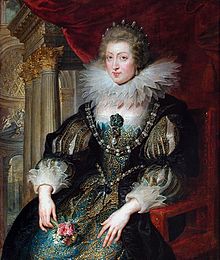 Anne of Austria (22 September 1601 – 20 January 1666) was queen consort of France and Navarre, regent for her son, Louis XIV of France, and a Spanish and Portuguese Infanta by birth. During her regency (1643–1651), Cardinal Mazarin served as France's chief minister. Accounts of French court life of her era emphasize her difficult marital relations with her husband Louis XIII, her closeness to her son Louis XIV, and her disapproval of her son's marital infidelity to her niece Maria Theresa

Reserve some hours daily to examine yourself and fortune; for if you embark yourself in perpetual co ...

God is a sure paymaster. He may not pay at the end of every week, or month, or year, but I charge yo ...

God does not pay at the end of every day, but in the end He pays.

“God does not pay at the end of every week, but He pays”