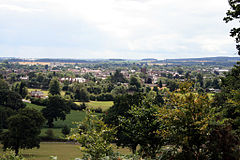 Newport is a market town in the borough of Telford and Wrekin and ceremonial county of Shropshire, England. It lies some 6 miles (10 kilometres) north of Telford and some 12 mi (19 km) west of Stafford, sitting on the Shropshire/Staffordshire border. The 2001 census recorded 10,814 people living in the town's parish, making it the second largest town in Telford and Wrekin and the fifth in the ceremonial county of Shropshire. By the 2011 census, the population had risen to 11,387

Sometimes a little near death experience helps them put things into perspective.