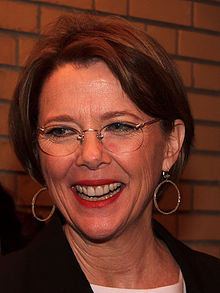 Annette Carol Bening (born May 29, 1958) is an American actress. She began her career on the stage and was nominated for the 1987 Tony Award for Best Featured Actress in a Play for her performance in Coastal Disturbances. A four-time Academy Award-nominee for her roles in the films The Grifters (1990), American Beauty (1999), Being Julia (2004) and The Kids Are All Right (2010), she won a BAFTA Award for American Beauty and Golden Globe Awards for Being Julia and The Kids Are All Right. Her other film roles include Valmont (1989), Bugsy (1991), The American President (1995), The Siege (1998), Open Range (2003), and Running with Scissors (2006)

Anybody who has children and children who are well feels a sense of responsibility towards parents a ...

Five billion people have played Hamlet. 'To be or not to be.' And how do you do that and find your w ...

We all get lost along the way, but hopefully we figure out some sort of path. It helps if you can im ...

Most people are looking for something to give their life meaning.

There's love for your parents, your family, your spouse, your partner, your friends, but the nature ...

To me idealized characters are so boring to play, especially having grown up in the classical theate ...

There are so many different kinds of relationships, so it's sort of difficult to define what is cons ...

My dad was in the life insurance business, so I learned about selling when I was about 14 because I ...

It's kind of a mystery to me, as far as my own life experiences and what I've witnessed - why some p ...

I knew I wanted children in my life. The acting was always in relation to it. Life at home is chaos. ...

Most women would say they relate to 'Hedda Gabler' - there's a part of her in them. Ibsen was writin ...

It's hard to make a living in this business. Unions aren't as strong as they used to be. For a journ ...

I don't see myself as competing with other actresses. I mean, I went through a time when I was in Ne ...

I love the craft of acting, I love learning, I love everything that comes with the new project; the ...