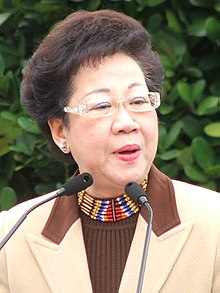 Annette Lu Hsiu-lien (Chinese: ???; pinyin: L? Xiùlián; Pe?h-?e-j?: L? Siù-liân; born June 7, 1944) is a Taiwanese politician. A feminist active in the tangwai movement, she is a member of the Democratic Progressive Party and served as the Vice President of the Republic of China from 2000 to 2008, under President Chen Shui-bian. Lu announced her intentions to run for the presidency on March 6, 2007, but withdrew to support eventual DPP nominee Frank Hsieh. Lu ran again in 2012, but withdrew for a second time, ceding the nomination to DPP chairwoman Tsai Ing-wen

In 2005, I founded the Democratic Pacific Union, an international organization of 28 democratic coun ...

Taiwan's democracy has grown very fast and we enjoy a certain degree of freedom, as other developed ...

Taiwan and China are related ethnically and close neighbors geographically. There's no reason to res ...

“I hope a miracle can occur as the military makes its courageous rescue efforts,”

“Sincerely, we wish and hope that China would have the honor to earn the auspicious Olympic Games ...

“The empty space must have been tightly sealed and become anoxic, allowing excellent preservation ...

“Chairman Ma is very different from Chairman Lien. Since we all agree to recognize the Republic of ...

“So these are two major lies that China has been telling the whole world. Unfortunately, the centr ...

“These two points are lies. UN Resolution 2758 does not say a word about the relationship between ...

“These two points are lies. UN Resolution 2758 does not say a word about the relationship between ...

“Our findings support the belief that early plant domestication and food production relied on mill ...

“The illustration of China's military capability and its deployment in the US Pentagon report rele ...