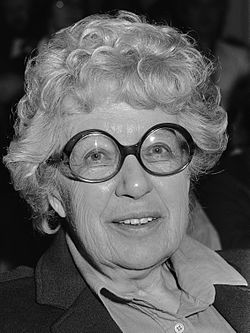 Anna Maria Geertruida "Annie" Schmidt (20 May 1911 – 21 May 1995) was a Dutch writer. She is called the mother of the Dutch theatrical song and the queen of Dutch children's literature, praised for her "delicious Dutch idiom," and considered one of the greatest Dutch writers. An ultimate honour was extended to her posthumously, in 2007, when a group of Dutch historians compiled the "Canon of Dutch History" and included Schmidt, alongside national icons such as Vincent van Gogh and Anne Frank