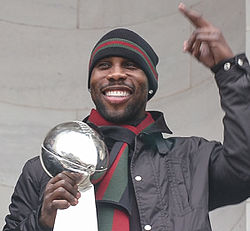 Anquan Kenmile Boldin (/?ænkw??n/; born October 3, 1980) is an American football wide receiver who is currently a free agent. He played his college football at Florida State, and was drafted by the Arizona Cardinals in the second round of the 2003 NFL Draft. He has also played for the Baltimore Ravens, San Francisco 49ers, and Detroit Lions

“I don't listen to outside opinion. We know what we have inside. You don't panic. Just because you ...

“I'm comfortable with that [a week's practice]. I've had numerous weeks of working on it, and a lo ...

“But no matter what people say about how we're going to be, ... we have to take care of our busine ...

“It is a little frustrating not to be out there, especially going through what I went through last ...

“It's more open. Last year, we were just bland. Wherever we lined up at, that's where we were goin ...

“I think we are just starting to get where we need to be.”

“Coach Green talked about teams in the league, how some teams are going to get better, some teams ...

“As an athlete, you think you are OK and you go by how you feel. But sometimes it's not that simpl ...

“I think we are a much better team than that. We just didn't put it in the end zone.”

“I don't put too much into it. That's something I'm willing to sacrifice, the numbers. Shoot, you ...

“When you don't win, you don't get the notoriety and the publicity. This will make me work that mu ...

“I'm going to go out Monday through Friday and work hard and try to help this team win, because Go ...

“[The doctor] said it heals on its own, so I guess I'm just waiting on that. His orders were for m ...

“That's one of the things we've set our eyes on, ending the year on a good note. We want to play o ...