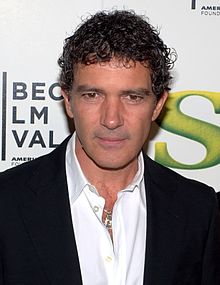 José Antonio Domínguez Banderas (born 10 August 1960) is a Spanish actor, director, and producer. He began his acting career with a series of films by director Pedro Almodóvar and then appeared in high-profile Hollywood movies, especially in the 1990s, including Assassins, Evita, Interview with the Vampire, Philadelphia, Desperado, The Mask of Zorro and Spy Kids. Banderas also portrayed the voice of "Puss in Boots" in the Shrek sequels and Puss in Boots as well as the bee in the US Nasonex commercials

I drink a bucket of white tea in the morning. I read about this tea of the Emperor of China, which i ...

Everything changes as you get older - your mind, your body, the way you view the world.

I do yoga every morning, then I run for half an hour and take a sauna.

I wouldn't want my daughters to date a guy like me. I was dangerous around women in my twenties. I'm ...

I remember in 'Law of Desire,' where I played a homosexual, that people were more upset that I kisse ...

Always when you go to a new country and they teach you bad words, you just say them without knowing ...

I've never worried about what audiences would accept or had a game plan regarding the career. I neve ...

I think the problems with being older come when your body cannot do what your mind wants. Then, Hous ...

I'm a complete hypochondriac. If my heart starts beating a little faster than normal, I think I'm ha ...

I love the diversity of America. I love the plain, normal sense of humor Americans have. It is not w ...

When you go to the movie theater and the opening of this movie and you see the kids just cracking up ...

Listen, I think movies serve many different purposes, from those movies that are frivolous and just ...

When you're feeling very comfortable with an actor, you are doing nothing.

Picasso is a character that has pursued me for a long time and I always rejected. He deserves a lot ...