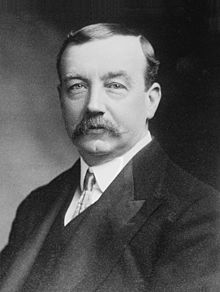 Arthur Henderson PC (13 September 1863 – 20 October 1935) was a British iron moulder and Labour politician. He was the first Labour cabinet minister, won the Nobel Peace Prize in 1934 and, uniquely, served three separate terms as Leader of the Labour Party in three different decades. He was popular among his colleagues, who called him "Uncle Arthur" in acknowledgement of his integrity, his devotion to the cause and his imperturbability. He was a transitional figure whose policies were, at first, close to those of the Liberal Party, and the trades unions rejected his emphasis on arbitration and conciliation, and thwarted his goal of unifying the Labour Party and the trade unions

Those nations have a very great responsibility at this juncture of the world's affairs, for by throw ...

In some states militant nationalism has gone to the lengths of dictatorship, the cult of the absolut ...

The years of the economic depression have been years of political reaction, and that is why the econ ...

But to cut off relations with an aggressor may often invite retaliation by armed action, and this wo ...

Therefore, let us not despair, but instead, survey the position, consider carefully the action we mu ...

Perhaps the grimmest aspect of this great paradox is that the very nations that are chiefly responsi ...

It is because I believe that it is in the power of such nations to lead the world back into the path ...

In almost every country there are elements of opinion which would welcome such a conclusion because ...

The question is, what are we to do in order to consolidate peace on a universal and durable foundati ...

The world before 1914 was already a world in which the welfare of each individual nation was inextri ...

We had four years of world war which the peoples endured only because they were told that their suff ...

One of the first essentials is a policy of unreserved political cooperation with all the nations of ...

Moreover, war has become a thing potentially so terrible and destructive that it should have been th ...

In our modern world of interdependent nations, hardly any state can wage war successfully without ra ...

It has become impossible to give up the enterprise of disarmament without abandoning the whole great ...