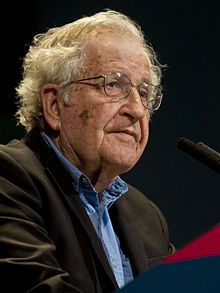 Avram Noam Chomsky (US /æ?vr??m ?no?m ?t??mski/ a-VRAHM nohm CHOM-skee; born December 7, 1928) is an American linguist, philosopher, cognitive scientist, historian, social critic, and political activist. Sometimes described as "the father of modern linguistics", Chomsky is also a major figure in analytic philosophy and one of the founders of the field of cognitive science. He is Institute Professor Emeritus at the Massachusetts Institute of Technology (MIT), where he has worked since 1955, and is the author of over 100 books on topics such as linguistics, war, politics, and mass media. Ideologically, he aligns with anarcho-syndicalism and libertarian socialism

The principles are clear and explicit. The free market is fine for the third world and its growing c ...

"ase by case, we find that conformity is the easy way, and the path to privilege and prestige; dissi ...

“If we choose, we can live in a world of comforting illusion.”

“If we choose, we can live in a world of comforting illusion.”

“The Bible is one of the most genocidal books in history”

“Language is a process of free creation; its laws and principles are fixed, but the manner in whic ...

“The intellectual tradition is one of servility to power, and if I didn't betray it I'd be ashamed ...

“The more you can increase fear of drugs and crime, welfare mothers, immigrants and aliens, the mo ...

“As soon as questions of will or decision or reason or choice of action arise, human science is at ...

“Unlimited economic growth has the marvelous quality of stilling discontent while maintaining priv ...

“The United States is unusual among the industrial democracies in the rigidity of the system of id ...