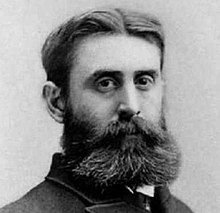 Benjamin Breckinridge Warfield (November 5, 1851 – February 16, 1921) was professor of theology at Princeton Seminary from 1887 to 1921. He served as the last principal of the Princeton Theological Seminary from 1886 to 1921. After the death of Warfield in office, Francis Landey Patton took over the functions of the office as the first president of seminary. Some conservative Presbyterians consider him to be the last of the great Princeton theologians before the split in 1929 that formed Westminster Theological Seminary and the Orthodox Presbyterian Church.

Before all else, Protestantism is, in its very essence, an appeal from all other authority to the di ...

Grace is free sovereign favor to the ill-deserving.

A firm faith in the universal providence of God is the solution of all earthly troubles.

I do not think that there is any general statement in the Bible or any part of the account of creati ...

The marvel of marvels is not that God, in His infinite love, has not elected all this guilty race to ...

He who begins by seeking God within himself may end by confusing himself with God.

We can no longer speak of a bourne from which no traveler e'er returns. The middle wall of partition ...

We have but one Saviour; and that one Saviour is Jesus Christ our Lord. Nothing that we are and noth ...

The Bible is the Word of God in such a way that when the Bible speaks, God speaks.

There is one only and true God, but in the unity of the Godhead there are three coeternal and coequa ...

To get rid of predestination we have been willing to degrade our God into a godling.

In the infinite wisdom of the Lord of all the earth, each event falls with exact precision into its ...

It is never on account of its formal nature as a psychic act that faith is conceived in Scripture to ...

A ROSE BY ANY OTHER NAME WILL SMELL AS SWEET. BUT IT DOES NOT FOLLOW THAT WHATEVER WE CHOOSE TO CALL ...

Had He not emerged from the tomb all our hopes, all our salvation would be lying dead with Him unto ...