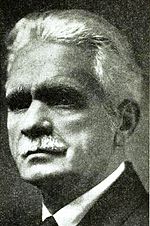 Brigham Henry Roberts (March 13, 1857 – September 27, 1933) was a Mormon leader, historian, and politician. He published a popular six-volume history of The Church of Jesus Christ of Latter-day Saints (LDS Church) and also wrote Studies of the Book of Mormon (unpublished until after his death), which discussed the validity of the Book of Mormon as an ancient record. Roberts was denied a seat as a member of United States Congress because of his practice of polygamy.

The Manifesto was a cowardly proceeding, the more I thought of it the less I liked it.

Did Ethan Smith's View of the Hebrews furnish structural material for Joseph Smith's Book of Mormon? ...

Faith is trust in what the spirit learned eons ago....

A temple, first of all, is a place of prayer; and prayer is communion with God. It is the 'infinite ...

There were other Anti-Christs among the Nephites, but they were more military leaders than religious ...

[T]he kingdom of God... is to be a political institution that shall hold sway over all the earth; to ...

First, we believe that God is a being with a body in form like man's; that he possesses body, parts ...

I can conceive of no reason for all this administration of the higher to the lower, unless it be for ...

The Seer Stone referred to here was a chocolate-colored, somewhat egg-shaped stone which the Prophet ...