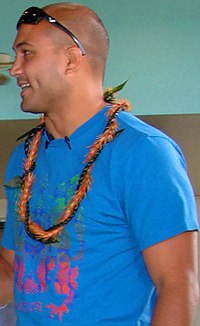 Jay Dee "B.J." Penn (born December 13, 1978) is an American professional mixed martial artist and Brazilian Jiu-Jitsu practitioner. Penn debuted and competed in the Ultimate Fighting Championship (UFC), and later in K-1. Prior to fighting for the UFC, he became the first American Gold medalist of the World Jiu-Jitsu Championship. In mixed martial arts, Penn has competed in the Featherweight, Lightweight, Welterweight, and Middleweight divisions. As a former UFC Lightweight Champion and UFC Welterweight Champion, he is one of only three fighters in UFC history to win titles in multiple weight classes. Penn was also a Co-champion in the UFC 41 Lightweight Tournament, due to an eventual draw opposite Caol Uno in the tournament finale. Through his tenures as champion, Penn unofficially unified the UFC Lightweight Championship (against Sean Sherk) and broke the all-time lightweight title defense record. Penn was inducted into the UFC Hall of Fame, as the inaugural inductee in the Modern-Era Wing by career-long rival Matt Hughes, during International Fight Week in July 2015.

Birds fly and fish swim and I do this.

Just try to give as much as you can through your daily life to yourself and the people around you.

I don't worry about losing all my fans. Whatever true fans you've got will stick by you, so that's n ...

Fighting is pure chaos, and to be a good fighter you simply have to be prepared mentally and physica ...

I just want to be known as the greatest everis that too much to ask?

It's not a certain technique, it's not a skillit's all in your mind, it's how far you want to go

You can't make everyone happy no matter what. All I can do is live my life and try to be successful ...

You're going to fall, but you got to stand.

It comes down to having fun and doing what I love.

People could connect with me... I think the appeal was that, "Here he is, he's just a normal guy lik ...

What you put into it is what you're going to get out of it. If you're getting the chance to step int ...

I always gave it the best shot I had, whether it went my way or not that night.