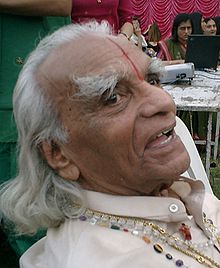 Bellur Krishnamachar Sundararaja Iyengar (14 December 1918 – 20 August 2014), better known as B.K.S. Iyengar, was the founder of the style of yoga known as "Iyengar Yoga" and was considered one of the foremost yoga teachers in the world. He was the author of many books on yoga practice and philosophy including Light on Yoga, Light on Pranayama, Light on the Yoga Sutras of Patanjali, and Light on Life. Iyengar was one of the earliest students of Tirumalai Krishnamacharya, who is often referred to as "the father of modern yoga". He has been credited with popularizing yoga, first in India and then around the world.

Hatha Yoga teaches us to use the body as the bow, asana as the arrow, and the soul the target.

Abhyasa (practice) is a dedicated, unswerving, constant, and vigilant search into a chosen subject p ...

The Yogi conquers the body by the practice of asanas, making the body a fit vehicle for the spirit. ...

Activity and passivity must go together in asanas.

The brain is the hardest part of the body to adjust in asanas.

That's the beauty of backbends. Emotionally we can never be disturbed, for the emotional centre beco ...

The body is your temple. Keep it pure and clean for the soul to reside in.

Do not aim low, you will miss the mark. Aim high and you will be on a threshold of bliss.

Asanas maintain the strength and health of the body, without which little progress can be made. Asan ...

Approach each asana with freshness every day.

Asanas keep your body, as well as your mind, healthy and active

Health is a state of complete harmony of the body, mind, and spirit.

You must fill every inch of your body with the asana from your chest and arms and legs to the tips o ...