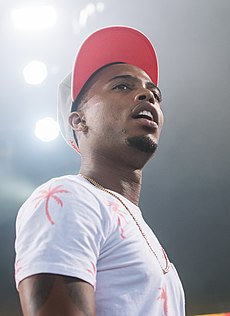 I can tell you who I'd like to work with as far as rock legends. Definitely Dave Grohl from the Foo ...

Sometimes for a lot of new artists, they don't have a vision, really, or know what they want to say; ...

I'm a fan of all these genres of music, everything from Mumford & Sons to Beach Boys to doo-wop musi ...

You have to feel good in what you're wearing; if you don't feel good it's not going to look good. Yo ...

I want to produce a country album for a country singer.

I love Coldplay. The lights, and the sound quality They really play their instruments. Sometimes, du ...

As a hip-hop artist who likes fashion, who can't help but notice people like Kanye West, Tiger, Big ...

To me, 'Underground Luxury' is kinda like a contrasting title, and the reason for that is because on ...

Rap is something you can just throw on the skillet and fry up real quick. That's how it comes to me, ...

I don't think you can mix classical music and reggae. It's not possible. But some producer in, like, ...

I've got a transcendental way of thinking about things. I've got a galactic self.

All through my life, I was hated on. When I was in middle school, they used to write in my rhyme boo ...

When you have a watch on, it just sets everything off. It's the icing on the cake when it comes to y ...

Nothin' on You' changed my life: I finally feel that I reached the point where I wanna be at. At tim ...

I do what I want. It's because I got booed and picked on that I really don't care anymore.