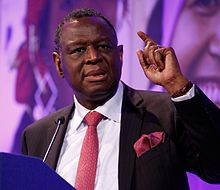 Babatunde Osotimehin (born 6 February 1949), a national of Nigeria, was appointed on 19 November 2010 as the new Executive Director of UNFPA, the United Nations Population Fund, for a four-year term. He was reappointed to this position on 21 August 2014 He assumed the position on 1 January 2011 and became the organisation's fourth Executive Director. He holds the rank of Under-Secretary-General of the United Nations. Previously, he was Nigeria's Minister of Health. He left this office in March 2010 when Acting President Goodluck Jonathan dissolved his cabinet.

The United Nations has been in the Great Lakes Region and Sahel for 50 years, mostly investing in pe ...

We know what to do and we know how to do it, these investments save lives, empower women and girls, ...

?We are optimistic of achieving the target. We are already working with our partners and also reachi ...

?We plan to add an additional 33 centers in the first quarter.?

The choices that women make have huge impact on families, on communities and on nations. Being able ...

Sexual and reproductive health and rights are universal human rights!They are an indivisible part of ...

?We reckon that about 50,000 infected people are now receiving anti-retroviral (ARV) treatment natio ...