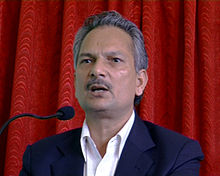 Dr. Baburam Bhattarai (Nepali: ??. ??????? ???????, born 18 June 1954 was the 35th Prime Minister of Nepal from August 2011 to March 2013. Founder chairman of Naya Shakti. As a way out of the political deadlock since the dissolution of the first Nepalese Constituent Assembly in May 2012, he was then replaced by Chief Justice Khil Raj Regmi to head an interim government that should hold elections by 21 June 2013. He was a senior Standing Committee Member and vice chairperson of Unified Communist Party of Nepal (Maoist) until his resignation from his post and all responsibilities from the party on 26 September 2015. He is now Coordinator of Naya Shakti a newly founded Party. His former party started People's War in Nepal (as self-proclaimed by Unified Communist Party of Nepal (Maoist)) in 1996 that had huge impact for the change of the political system in Nepal. The decade-long civil war which claimed life of more than 17,000 Nepalese had a major role in transformation of Nepal from a monarchy into a republic. He was elected to the Constituent Assembly from Gorkha in 2008 and became Finance Minister in the cabinet formed after the election.

?The minimum demand is a free election to a constituent assembly.?

?Our campaign aiming to boycott the polls has been successful and taking into consideration appeals ...