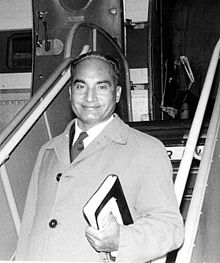 Bakht Singh Chabra (Also known as Brother Bakht Singh) (Punjabi: ??? ????; Hindi: ????? ????) (June 6, 1903–September 17, 2000) was a Christian evangelist in India and other parts of South Asia. He is often regarded as one of the most well-known bible teachers and preachers and pioneers of the Indian Church movement and Gospel contextualization. According to Indian traditions, he is also known as 'Elijah of 21st Century' in Christendom. According to his autobiography, Bakht Singh first experienced the love and presence of Jesus when he was an engineering student in Canada in 1929. Even though previously he had torn up the Bible and was strongly opposed to Christianity, he then became a Christian. He was India's foremost evangelist, preacher and indigenous church planter who founded churches. He began a worldwide indigenous church-planting movement in India that eventually saw more than 10,000 local churches. Singh died on 17 September 2000, in Hyderabad, India. He was 97.

I have never yet failed to get a hearing (with a Hindu) if I talk to them about forgiveness of sins ...

If we die without making peace with God through His precious blood which was shed for us on the cros ...

The only thing God is building in this world is his church.