Barbara Buckley (born November 23, 1960 in Philadelphia, Pennsylvania) is an attorney and Democratic Party politician who served as a member of the Nevada Assembly, representing Clark County District 8 from 1994 to 2011. She served as Assembly Speaker from 2007 to 2011, the first woman in Nevada history to serve as Speaker. She also served as Majority Leader of the Assembly from 2001 to 2007. Recently enacted term limits prevented Buckley from seeking re-election in the 2010 elections. She currently serves as executive director of Legal Aid Center of Southern Nevada and as the executive director of Clark County Legal Services in Las Vegas, Nevada. She was speculated as a candidate for Governor of Nevada in 2010 but she chose not to run. She considered running in 2014 but again declined to do so, saying that "I am not getting back into the political world". 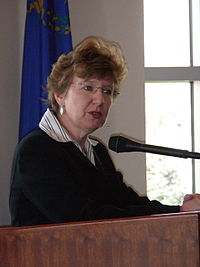 ?The whole file should be open. Let's look at the good that can come from that. If we understand how these cases happen, maybe that's the first step in making sure these things don't happen again.?

?What assurance do we have that the gas companies would not raise their prices??

?Nevada has passed more and more laws to become the Delaware of the West, ... This type of situation can serve as a wake-up call that we like their business but not if it's going to deceive people. I don't think Nevada wants to be a haven for crooks.?

?Who are we trying to protect??

?Cancer in the Family: Communicating With Your Children?