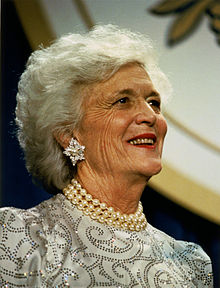 To us, family means putting your arms around each other and being there.

At the end of your life, you will never regret not having passed one more test, not winning one more ...

Cherish your human connections - your relationships with friends and family.

I think togetherness is a very important ingredient to family life.

You may think the president is all-powerful, but he is not. He needs a lot of guidance from the Lord ...

Family and friends and faith are the most important things in your life and you should be building f ...

I'm a great believer that the most important years are the sort of early years but the preschool yea ...

You can't tell a 6-year-old your sister is going to die.

The personal things should be left out of platforms at conventions. You can argue yourself blue in t ...

I really loved living in the White House, but I don't miss it at all.

Raising five boys is a handful, trust me.

I hate abortions, but just could not make that choice for someone else.

My son, George, has been a bad, bad boy! Right, George?