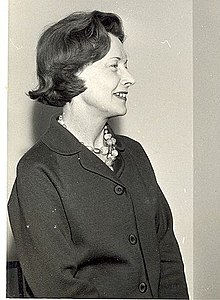 Barbara Anne Castle, Baroness Castle of Blackburn, PC, GCOT (née Betts, 6 October 1910 – 3 May 2002) was a British Labour Party politician who was the Member of Parliament for Blackburn from 1945 to 1979, making her the longest-serving female MP in the history of the House of Commons, until that record was broken in 2007 by Gwyneth Dunwoody. She later became the Member of the European Parliament for Greater Manchester from 1979 to 1989. One of the most significant Labour Party politicians of the 20th century, she served in the Cabinet under Prime Minister Harold Wilson in a number of roles, including as Secretary of State for Employment, Secretary of State for Health and Social Services, and First Secretary of State.

Why get rid of Chamberlain to put in Halifax? It's like getting rid of the organ-grinder to put in t ...

And what always struck me about that war period was how even Churchill had to talk socialism to keep ...

Britain in the 1970s was undoubtedly an economic mess because of the oil price explosion.

Large motorway flyovers are the cathedrals of the modern world.

In politics, guts is all.

I will fight for what I believe in until I drop dead. And that's what keeps you alive.

Think, think, think. It will hurt like hell at first, but you'll get used to it.

I have never consciously exploited the fact that I am a woman. I wouldn't dare try that even if I kn ...